By April 2009, F&A Dairy had outgrown its WWTP. With significant increases in production, the static-tube aeration system was unable to deliver sufficient oxygen to the lagoon treatment system. The plant was now processing close to 1 million pounds of milk per day. The 35-year old system was not originally designed to handle such a large load and could not keep up with the plant’s needs.
The original static-tube aeration system was at capacity with all four 50-Hp blowers (3,000 cfm each.) Even at capacity, the system was only able to maintain a dissolved oxygen level of 0.1mg/l which resulted in operational troubles and odors.
For a short-term fix while F&A Dairy searched for a solution, the plant purchased an Ultra V 30 Hp aspirating pump and rented two more powered by a portable diesel generator. This added a 90 Hp load onto the electricity consumption in addition to the four 50Hp blowers powered by a portable diesel generator to handle peak summer conditions.

“[The plant has] been able to spray irrigate their effluent because their nitrogen concentrations are lower than they have been in the past. That has saved the plant money because they are no longer paying the city to treat their effluent.”

After the evaluation was complete, Symbiont recommended employing a fine-bubble aeration system that could be installed without dewatering the existing treatment lagoons, and would provide an energy efficient system to meet the demands of the 1 million lbs/day production. 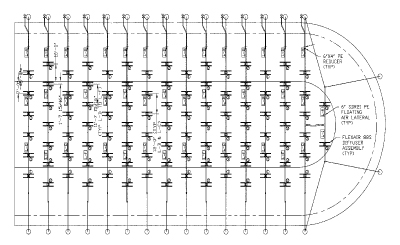