Bridgeport, CT, is part of a cooperative effort that sets stringent discharge limits to protect the body of water known as Long Island Sound. The operating company running Bridgeport’s plant, however, was struggling to meet those discharge limits; due to their 17-year-old ceramic disc diffuser aeration system that was failing both structurally and mechanically. The city was not only losing more than half a million dollars in annual “nutrient credit,” they were also facing penalties for not meeting their discharge permit. On top of that, inefficient energy usage was costing them money.

The city was waiting for the state revolving fund to take on the very competitive bid that EDI offered for a system upgrade. But it was taking a long time. To help the city with the funding issue, a new solution was necessary.

EDI came up with a unique payment mechanism with the operating company. It was an eight-year lease agreement that allowed the city to take on the project by making payments from their operating budget savings.

Based on EDI’s model, the proposal stated that the city would be able to save over $250,000 per year from energy, against an annual installment payment of around $130,000 to EDI for the system upgrade.

Once the financing challenges for the project were sorted out, EDI faced the challenge to execute the project according to the city’s preference. The city agreed for only three days downtime for their tanks, so to save time on installation, EDI came up with the unique solution to put a fixed grid diffuser system with EDI’s high oxygen transfer efficiency FlexAir Pro MiniPanel fine bubble diffusers; installed over the top of the existing installation of the ceramic disc diffusers.

EDI pre-assembled the laterals, de-watered the tank, installed the laterals on top of the ceramic diffusers, and watered the tanks back – all in the extremely cold weather of March 2017, when any remaining water in the tank used to turn into ice overnight. Thanks to its elite squad of wastewater treatment installation specialists, SiteWorks pulled-off this task that everyone thought would be impossible.

The new system can be served with one blower; whereas the previous system required two – with a third blower running occasionally. That reduced the power usage from 540 hp. to around 210 hp.

EDI has subsequently confirmed that since the upgrade, actual savings have been on track to reach well over the promised $250,000. 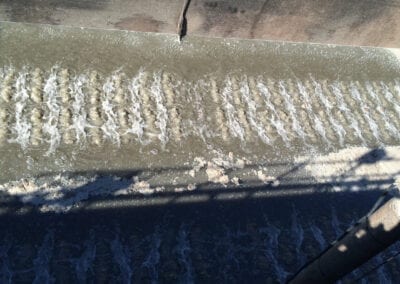 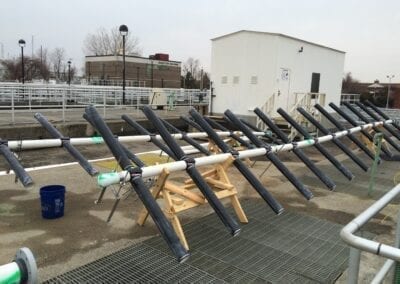 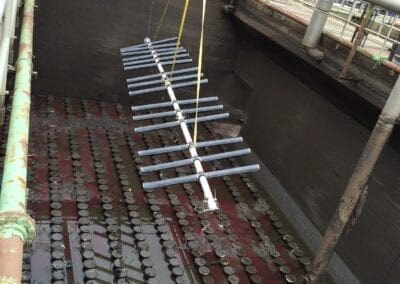